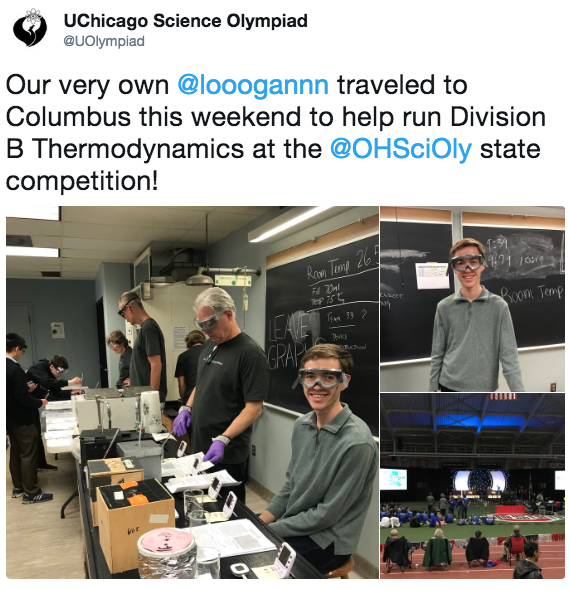 Logan Leak is a prime example of the impact Science Olympiad can have on a student.

The Mentor, Ohio, native was a five-year Science Olympiad participant as a middle and high school student. This past April, Leak—who is now a University of Chicago student studying molecular biology—returned to his home state to volunteer at the Ohio Science Olympiad State Tournament.

Leak answered an invitation for volunteers from his former Mentor coach and made the trek from Chicago to Columbus to assist with the Thermodynamics event.

“It was a really fun experience because I competed in that event in middle school. Now I’m on the other side as a volunteer,” Leak said. “As a competitor, it was super stressful because we were always on the cusp of making it to nationals.”

Volunteering at the state tournament gave Leak a different perspective than what he originally knew. “It allowed me to see things from an open perspective, take a deep breath and take in everything the state competition has to offer,” he explained. “The kids where really excited about what they created, and I appreciated the effort they put into it. It was neat to see all the smiles on their faces and seeing how proud they were when they finished the test knowing they did a great job.”

Leak was first introduced to the Science Olympiad program in sixth grade when his friends joined. The following school year, he accompanied the team to the state tournament and that’s when it hit him that he wanted to be a part of this program.

He officially joined in eighth grade and “fell in love.” Biology events, such as Disease Detectives, piqued his interest and would spur his eventual college major. Leak also enjoyed the hands-on events such as Mission Possible and Write It, Do It.

In his junior year of high school in 2015, Mentor placed second at the state tournament to earn an opportunity to advance to the national tournament in Lincoln, Nebraska. “It was neat to see everyone coming together in a friendly, competitive environment.”

Once at UChicago, Leak found other past participants of Science Olympiad and came together to form the UChicago Science Olympiad student group, dedicated to promoting the program in the city and surrounding communities.

Leak and his fellow organizers are doing their part to generate interest in sciences by working with Chicago Public Schools and other school districts. The group hosted its first invitational in January, welcoming 39 teams from Illinois, Indiana and Ohio. Somehow, between outreach and invitational tournament hosting duties, the group finds time to volunteer at nearby tournaments, which is how Leak ended up back home for the Ohio state tournament.

For Leak, continuing his Science Olympiad participation is all about serving others and giving back to an organization that has given him so much.

“Science Olympiad provided me the opportunity to explore the diversity of science-related fields. It’s the reason why I pursed a science in college—my participation is a reflection of my interest in that.”

After this season, the UChicago Science Olympiad group will continue to focus on its outreach goals. Leak notes that they are continuing to connect with Ohio’s State Director, Angela Davis, and others interested in Science Olympiad’s Urban Schools Initiative, which provides participation and financial opportunities to underserved or underrepresented communities.

“There’s this larger Science Olympiad community out there with similar interests, and my goal is connecting with the right people, and asking them to share resources and ideas used in their areas,” Leak said. “That’s what I’m excited about—connecting with others in reaching out to communities interested in these competitions and give them the experience I had.”